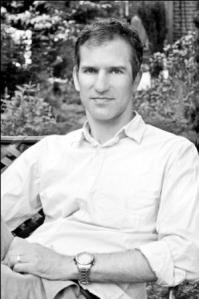 I grew up in Boston, did my undergraduate studies at Harvard, and have been living in New York for the last dozen years. I majored in History and Science, so I’m coming at my work from a sociological/philosophical perspective.

Depending on whether you were being charitable, you could either call my career trajectory peripatetic, eclectic, or schizophrenic. I started out as a rock critic in the mid-1990s. Since then I’ve covered city government and local crime for The Palm Beach Post, Rudy Giuliani’s tenure as mayor for The Forward, and the 2000 presidential campaign for Brill’s Content. Since 2003, I’ve mainly been writing features for Vanity Fair and working on books. My first book, Hard News, was about the plagiarism scandals at The New York Times, and my second one, Feeding the Monster, is about the year I spent living with the Boston Red Sox. I’ve traveled to Iraq and embedded with Stephen Colbert for Vanity Fair.

In 2008, I began working on the what became The Panic Virus, about the vaccine controversies of the past several decades. It’s the first time I’ve focused on science in my professional work, and it reminded me of why I studied it in the first place…and in the fall, I’ll have a chance to dive back into academia when I head over to MIT as a lecturer in their Graduate Program on Science Writing.

Since the book came out, I’ve spent much more time than I would have thought deal with the incredible amount of anger and vitriol that surrounds any discussion of this issue. It’s incredibly difficult not to get caught up in it — and in some ways, I think it represents the flip side of the ways in which the Internet has created a more frictionless environment that can be incredibly helpful for science writers and researchers. When someone posts a blog entry about my family, or accuses me of being part of some convoluted conspiracy, it’s hard not to want to throw up an equally vituperative response. Going down that rabbit hole, however, can end up taking over your life.

As for goals, I hope my next project is one that I don’t need to rush to finish in a year or two, either for financial reasons or because of some news-peg or time-related pressure. The Panic Virus was the most rewarding experience of my professional life on almost every level — but I don’t think I could subject myself (or my family) to another year of 14+ hour days.

The other thing I’ve become passionate about is the really crucial importance of reliable, responsible, and compelling science writing — and promoting/nurturing/advancing that type of work is something I hope to be more and more involved with in the years to come.

Ask me again after our panel at the World Science Festival next week!

I think one of the most interesting aspects of science communication vis a vis the web will be how notions of accountability evolve. Obviously, social networks have allowed for a sort of hive-factchecking mechanism and in many cases seem to be forcing “mainstream” journalism to be more responsible when covering complex issues involving science — which is a wonderful thing.

I don’t think we’ve fully come to grips with the implications of the different types of “speech” that we use online. Should a scientist’s Twitter feed be held to the same level of accountability as his or her published work? Does a reporter’s personal blog reflect on the institution he or she works for? If not, why not? If I retweet something or post a link to an article/study on Facebook, does that imply that I approve of it? What’s the difference between suggesting something is being worthy of attention and that it’s worthy of respect?

All of those are issues that haven’t really been worked out, and I think that there’ll be some fireworks over the next few years as we seem them come up more and more.

Twitter and Facebook have been the two most instrumental tools in reaching a broader audience — more important than reviews or radio interviews. The vast majority of the events I’ve done related to my book have come about through social network contacts, starting with ScienceOnline and going through talks I’ve given in Las Vegas, Denver, LA, and San Francisco. In a time of declining book sales, it’s hard to overstate how important those interactions have been — both to spark new ways of looking at the issue and to keep people interested in my work.

That said, I need to make sure my hair-trigger, instant-gratification tendency to post every thought on Twitter or comment on every last post doesn’t end up leeching time away from the rest of my work. Time management is not one of my skills, so it’s something I need to constantly be aware of.

I first started reading science blogs in earnest in 2009, and that was related to work on my book. It was a little bit like pulling on a piece of yarn on a sweater: I’d started reading one post by one writer and eight hours later would wonder what had happened to my day. There are so many blogs by SciO11 participants that I read regularly it’d be impossible to list them all. The most direct impact here has been my joining the PLoS blog network, which happened through my contact with SciO11’er Brian Mossop…and one of the thrills of being there has been seeing my writing appear alongside that of Steve Silberman, whom I’ve been reading since the 1990s and has long been a writing hero of mine.

What was the best aspect of ScienceOnline2011 for you? Any suggestions for next year?

Without a doubt the connections I made — socially, intellectually, professionally. I think I’d need to attend for another year before I felt competent to make suggestions about what might be done to improve it.

Is there anything that happened at this Conference – a session, something someone said or did or wrote – that will change the way you think about science communication, or something that you will take with you to your job, or to your science reading and writing?

One of the most remarkable aspects of SciO11 for me was the incredible sense of support and enthusiasm and respect everyone had for each other and each other’s work. I’ve written about the media; I’ve covered politics; I’ve been a crime reporter. Most of the time, my experience has been that reporters view competition for writing jobs as a sum zero game: If someone else is succeeding, that means there’s one less opportunity for them. It’s such an entirely different dynamic when it comes to science writing.

I have various theories as to why this is, but in the end, I don’t think it really matters. There’s an enormous need for good science writing and an enormous amount of topics that need to be covered.

Thank you so much for the interview. See you next week in NYC and hopefully again in Raleigh in January.