Continuing with the tradition from last two years, I will occasionally post interviews with some of the participants of the ScienceOnline2010 conference that was held in the Research Triangle Park, NC back in January. See all the interviews in this series here. You can check out previous years’ interviews as well: 2008 and 2009.

Today, I asked William Saleu to answer a few questions. 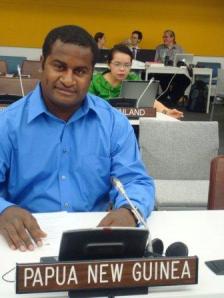 My name is William Saleu and I blog at BomaiCruz. I am from Papua New Guinea (PNG), an independent island nation making up the eastern part of the island of New Guinea which lies immediately north of Australia. I am a research fellow at the Duke University Marine Lab (DUML) in Beaufort, North Carolina.

I am part of a team that studies population structure and species connectivity among invertebrates from hydrothermal vent systems from the western Pacific. Most of our samples were collected from PNG so as you can imagine I have naturally taken up a personal interest in this subject. My ultimate goal is to be able to use the results of this research and other similar work to help identify and design conservation strategies for these unique ecosystems in PNG.

So one might wonder how I ended up doing this. To answer that question I will have to take you back to my final days as an undergraduate at the University of Papua New Guinea (UPNG). I was a biophysics major and was almost at the end of my program when I realized that my options for employment after college were very slim and I decided to look at opportunities for post grad research at UPNG. I spoke to my physics advisor but he was not so enthusiastic about having me on his projects but told me to come up with my own project.

I was sitting in a microbiology class when I heard the professor say something about chemosynthetic bacteria and how they were the basis of life at hydrothermal vents but she went on to say that because of the extreme conditions they lived in, not much was known about them as it was very hard to culture them. I also found out then that we had hydrothermal vent systems in PNG that geologists were so interested in studying. This was it, this was the project I was looking for. I decided I was going to build an incubator that would house pressure sensors and thermometers and could go all the way down to the sea floor, collect these bacteria and bring them to the surface at similar conditions to that of their sea floor habitats, little did I know that people in the developed world have already invented deep sea submersibles and remotely operated vehicles that did the same thing. Anyway, my proposal never went through as no one in PNG ever took it seriously.

I ended up in the streets like so many other Papua New Guineas before me who had gone through college but could not find anything to do. Then, one day while reading a newspaper, I came across an advertisement for people with advanced degrees in science to submit applications for a semester long traineeship at Duke University Marine Lab (DUML). I did not have an advanced degree but one of the requirements was that applicants should have sound knowledge in molecular biology and lab work skills and I knew I could use this to my advantage as I had been an intern at the PNG Institute of Medical Research’s molecular and virology labs and this was the only lab in PNG doing molecular work.
Well, I submitted an application and got the opportunity and came over for the traineeship and went home but thanks to the network I have set up before, I am back now as a research fellow studying the same things that I wanted to work with when I was an undergrad.

How does (if it does) blogging figure in your work? How about social networks, e.g., Twitter, FriendFeed and Facebook? Do you find all this online activity to be a net positive (or even a necessity) in what you do?

As far as my blogging family tree goes, I guess I will look up to Southern Fried Science as my blog parent and Deep Sea News as the granny. These guys have been awesome at helping me in everything from day one of BomaiCruz. The name ‘Bomai’ hails from the Simbu language of PNG and would translate for someone from the deep jungles, while ‘Cruz’ is from tok pisin, one of the three main languages of Papua New Guinea. ‘Cruz’ actually means to wonder around, hence, BomaiCruz, “someone from the deep jungles wondering around.”

I did not know about blogging, Twitter or Facebook before coming to the USA but am now on Twitter as BomaiBlat and on Facebook too. All this is very exciting for me but keeping up to speed with every one of them can be quite a hassle. I have found that networking can be quite addictive but is also so much fun and is a great way of sharing information and learning about what is going on in the world or just to take part in arguments and discussions. Personally, I have learnt so much more from networking and socializing with other members however, my only word of advice here is that networking and socializing can be so much fun as long as you know how to control its use.

What was the best aspect of ScienceOnline2010 for you? Any suggestions for next year? Is there anything that happened at this Conference – a session, something someone said or did or wrote – that will change the way you think about science communication, or something that you will take with you to your job, blog-reading and blog-writing?

I know this is not going to go down well with other bloggers but I was lucky enough to attend the ScienceOnline conference just a few weeks after I posted the first blog post on my wall. Unfortunately I cannot make comparisons with past science online conferences but from what I saw in this year’s conference, I should say that it was one of the best conferences I have been to in terms of organization and set up. There are two sessions I will remember for a very long time, first was Rebecca Skloot where she was talking about her book and the second and I should say, the one I really liked was the Open Access talk. I think the importance of Open Access as outlined by the speakers is one thing I will take away with me and make sure to pass on to others that I might end up working with.

It was so nice to meet you in person and thank you for the interview. I hope to see you again next January.

This entry was posted in Scio10 Interviews, SO'10. Bookmark the permalink.