Wow! The last couple of days were quite an emotional roller-coaster. The comments on the old blog our now closed, but the farewell post on the old blog accumulated 89 comments and its copy here already has 40. And they have been so supportive. I am so humbled.

The outpouring of love and support on Twitter (and also some on FriendFeed and Facebook) was overwhelming. The link to my post was tweeted by hundreds of my friends, and also by such luminaries as Dan Gillmor, Dave Winer and Jay Rosen (twice). Unfortunately, Twitter Search works only for the tweets made over the past two weeks so all the replies, retweets and mentions (here or here) will disappear soon. But hashtags are easier to save – just check this out!!!. Wow! Just wow! I don’t know how to respond. #I Owe You All!

A number of people have left Scienceblogs recently, just before or just after me, but there is a common Sb Diaspora RSS feed so you can follow all of us. And a @SBExpats Twitter account.

I really need to thank all of the bloggers who wrote nice things about me or my post, and those who used it as a starting point to an important discussion about the future of the changing ecosystem of science blogging.

And Thank you to the Sb Overlord Evan Lerner for keeping this Buzz topic on the scienceblogs homepage for the third day in a row: 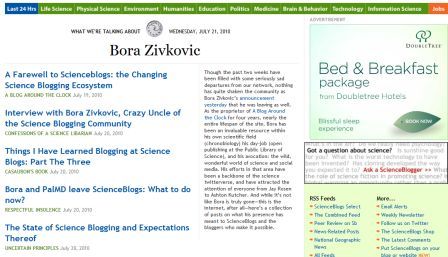 But what will be the most interesting to see is if the new island nations will war or trade with each other, or even join a loose confederation. What kinds of boats will be used to paddle between the islands? What kind of goods will be traded between them?

As for my own blog? No rush. I need to think. First, it will take me a few days (or weeks) to get this place in shape. I need to move from wordpress.com to wordpress.org (I own coturnix.org so I should make something like coturnix.org/blog and have it there). And make the place pretty.

The traffic at the old site went through the roof earlier this week, and the new site did fine during its first couple of days. I expect it to go lower, but that is OK:

As you may have already noticed, Clock Quotes are gone. “New and Exciting in PLoS” posts are now tweets (though I may figure out a way to do something similar on the everyONE blog, something like “Bora’s Bloggables”, making sure it is obviously my own choice, not that of the PLoS marketing department). Carnival announcements are also gone to Twitter. Announcements for events (e.g., local science cafes, Sigma Xi pizza lunches, World Science forums, etc,) I can bundle 2-3 in a single post instead of each separately. No pressure to have something always on the Last24H page as there is no such page for me now. I will continue doing updates on ScienceOnline2011 and Open Laboratory, posting Q&As with the past participants of ScienceOnline2010, and an occasional monstrously long post on one topic or another, perhaps even science! Whatever rocks my boat.

As for the future? I don’t know. We’ll see. I may stay solo for a while, perhaps end up on another network (or two, or three) further down the line. There is blogging to be done on ScienceInTheTriangle and everyONE blog, so who knows.  If I ever got the opportunity to try Scripting2, that seems to be a blogging platform one could love, not just be satisfied with. That can boost one’s blogging energies in itself.  But for now, blogging itself is not a priority for me right now.

The first priority is to find a way to support my family. If you want to help, check out this store – that is stuff we already have, boxed up and ready to go. If nothing there is interesting, there is always the Zazzle store but hold off on the CafePress as the items there need to have the URL changed first (I should get to it over the next few days). Or click here:

Then, also, Anton and I are now in fifth gear organizing ScienceOnline2011. In order to make the conference a little bit bigger (something like 130 people were left on the waitlist last year!) we need more new sponsors. If you know a potential sponsor, let us know, make contact.

Open Laboratory is also going to be a big project, as it is every year, so December and January will be busy around that as well.

You are all going to see my posts if you grab my feed (or the combined diaspora feed) or if you follow me on Twitter, FriendFeed or Facebook, so I’m fine.

Thank you all so much!

Update: I added more thoughts to the events and the future at Science Blogging Networks: What, Why and How

This entry was posted in Blogging, Housekeeping, Personal. Bookmark the permalink.

9 responses to “Thank you!”