Scienceblogging: the Gam – a Q&A with Andrew Thaler

Over the next several months, I intend to do Q&As with a number of people who have done something interesting, useful, remarkable or at least memorable in the world of science blogging. I will interview founders and managers of networks, aggregators and services, pioneer bloggers, professional bloggers and others I think are interesting and have insight and information that should not be lost to the science blogging world.

We are also continuing to develop (and need your input and help) the Scienceblogging.org aggregator where you can discover dozens of networks and communities containing thousands of science bloggers.

I am also hoping to get several more ScienceOnline2010 participants interviews posted before ScienceOnline2011 – those are also all very fascinating people and what they said in those interviews are historical documents about the origins and evolution of the science blogging (and science communication) ecosystem.

I am starting this series with the Q&A with Andrew Thaler, blogger at Southern Fried Science and manager (and one of the founders) of the new independent science blogging network – the Gam. 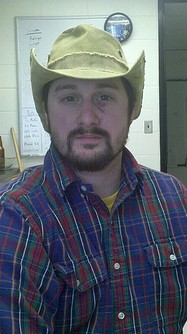 Hi, thank you for taking your time for answering a few questions about the past, present and future developments of the science blogging ecosystem. Let me begin with you – can you tell our readers, please, who are you, where you come from and how you got into science blogging?

I’m a graduate student at the Duke University Marine Lab studying gene flow and population structure at hydrothermal vent ecosystems. I started blogging on the encouragement of Kevin Zelnio of Deep Sea News. I really enjoy being able to discuss science with a broader audience. After several months I added David Shiffman and Amy Freitag to the blog to expand the discussion.

Everyone seems to agree that the summer of 2010 saw some big and important changes in the science blogging ecosystem. What are your own thoughts on this? Where do you think it will go next, over the next couple of years? How do the big changes in science blogging affect medical bloggers?

I feel like the great blowout had been brewing for a long time. Even at ScienceOnline2009 there were bloggers expressing their frustration with the (then) two major networks. I’m not privy to the inner working of ScienceBlogs, but it seems like there were some deeper problems in the way the network was being managed that caused many bloggers to seek other options. The Pepsi Blog incident was just a catalyst. I think that was largely a good thing. ScienceBlogs came with prestige and a paycheck but the sheer size of the network made it unwieldy. As more direct ways of reaching an audience (Twitter, primarily) became more popular, the benefits of such a large network became less and less important, and the detriments started to become more apparent.

How do you personally read science blogs? Do you use feeds, or social networks, or some other ways of keeping track of the science blogging world? How do you find new blogs?

I have feed reader for my favorite blogs, the ones I like to check every day. For everything else, Twitter is king, although I’ve found that since we started building a network, I find out a lot from other members of the Gam through e-mail and the back channel.

Tell us a little bit more about The Gam. What is it about? How did it come about? By what process do you add bloggers to the network – do they apply, do you invite them, or some other way?

The structure of the Gam began shortly after Science Online 2010. We had invited William Saleu to join us on Southern Fried Science, but we felt that a forth blogger on the main site would be quickly drowned out by pictures of dolls and posts about manatee farts. So when we moved from a free hosting platform, we set up our domain to allow blogs under the southernfriedscience.com domain. After Bomai Cruz launched, we stayed dormant for awhile. I had a vision for a network, but was busy with the rest of my life. Luckily, the structure for building a network was already there.

The Gam is a collection of (mostly) marine science blogs. Our goal is to find good new, less well known, or lower traffic niche blogs, and bring them to a broader audience. Bloggers can be nominated by any member of the Gam or they can approach us with a proposal. Once we vote on the new blog, we send an invite. After a blogger is invited, we can be set up to launch a new blog within a few hours.

Where do you see The Gam within the global science blogging ecosystem – what is its position, how does it differ from others, what is the target audience, what unique service does it provide?

We definitely have the marine science edge going for us, in conjunction with Deep Sea News, who we’re very close with, we comprise the largest collection of marine science bloggers on the internet. I think we’re more flexible than other blogging networks (all bloggers have total control over their web design, among other things) and we avoid the potentially toxic effect of advertisers. Each blog has a different target audience. Some of us are writing for scientists, some for the general public.

What is next for The Gam (as far as you are free to reveal)?

We have a really exciting site about to launch called Journeys. Journeys will be a group blog featuring writing by scientists in the field collecting data. It’s essentially an aggregation of expedition blogs – those one hit wonders that show up for a few months and then go silent. Because Journeys is a permanent platform, those expedition blogs won’t fade into the internets. In addition, Journeys comes with a built in audience, social media support through an active network of bloggers, and tech support, so writers can focus on writing and research and not worry about blogging from the back country.

This entry was posted in Blogging and tagged Scienceblogging Q&As. Bookmark the permalink.

2 responses to “Scienceblogging: the Gam – a Q&A with Andrew Thaler”